How a Foundation Apprenticeship can shape your future

Young people no longer need to leave school and go straight to a job with no real idea of what to expect. Foundation Apprenticeships have been developed to help them gain valuable, real-world work experience and access work-based learning while they are still at school.

"I heard about it through my computing teacher at the time,” says Eilidh. “She gave me the information and I thought it sounded like something I’d be very interested in. We learned all sorts on our course which was great because it let me see the different parts of computing, a lot of which I wouldn’t have learned in school.”

As part of her FA, Eilidh had a work placement at MTC, a web development company based in Dundee and Edinburgh.

“I was quite surprised as I expected to be doing mainly shadowing work but I was really allowed to dig in and get lots of practical experience,” explains Eilidh. “A Foundation Apprenticeship gives you a good mixture of skills and I think getting experience out of school was very useful.” 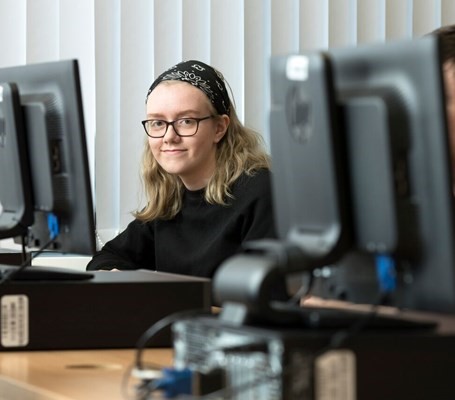 Now all Eilidh’s hard work has paid off as she has been shortlisted for Foundation Apprentice of the Year in the Scottish Apprenticeship Awards 2019 which celebrates the best of work-based learning.

“Eilidh was an excellent student throughout her two years on the course. She had a great attitude and excelled in all tasks. She completed her placement despite a number of personal issues and MTC were amazed at her level of ability.”

Eilidh is delighted to have been shortlisted.

I was amazed! I didn’t even know I’d been nominated and to be one of the finalists is an honour.”

So, apart from eagerly awaiting the results at the finals on 7 November, what’s next?

“My ambition after college is to go to university then get a job in web development.”

Still at school but want to gain real-life work experience? You can get a head start in your future career now with a Foundation Apprenticeship. It counts as one of your subject choices, is the same level as a Higher and gives you valuable work experience.

Find out more about what the college is offering by contacting our Academic Partnerships Team at APT@dundeeandangus.ac.uk or 01382 834847

You can also speak to your school Guidance Teacher (Dundee schools) or Pupil Care and Support Teacher (Angus schools).